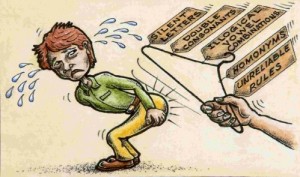 A 12-year-old Emirati boy in Abu Dhabi has allegedly been beaten to death by his father, reports in the UAE has revealed.

The father, who beat his son for receiving bad grades in the first trimester school examinations, is currently in police custody pending official charges next week.

Police officials told newsmen that the incident occurred towards the end of December, 2012.

According to sources close to the family, the victim was enrolled in grade 8. Having underperformed in the school examinations, he had been afraid to show his grades to his family and had hidden them.

When the victim’s father found out about the grades, he reportedly beat his son using a computer cable until the son collapsed.

The victim who was rushed to the hospital sources alleged had died before reaching the hospital due to the severity of his injuries, which led to a cardiac arrest. The father then fled his home but was later found by the Abu Dhabi Police.

Friends of the family claimed that the father had previously been an alcoholic, and that he had received treatment for his addiction. He was also allegedly unemployed when the incident occurred.

“We are aware of the incident and have also received reports from the hospital where the boy was taken. However, due to the sensitivity of the case and because it is an internal family matter, the details were not revealed to the public at the time,” he said.

Investigations into the incident by the Public Prosecution will begin next week, the official said. [GN]