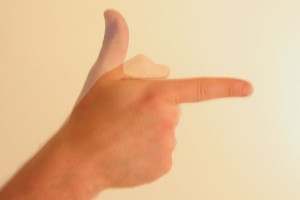 The parents of a 6-year-old boy are fighting the first-grader’s suspension from a public school in Montgomery County, Maryland for pointing his finger like a gun and saying “pow,” an incident school officials characterized in a disciplinary letter as a threat “to shoot a student.” The first-grader was suspended for one day, December 21.

The family’s attorney filed an appeal Wednesday, asking that the incident be expunged from the boy’s school record amid concerns of long-term fallout. The boy “had no intention to shoot anyone,” said attorney Robin Ficker, who described the child as soft-spoken, with no propensity for violence. “He’s skinny and meek. In his words, he was playing.”

The suspension came in a week when the nation was reeling from the massacre that claimed the lives of 20 children and six staff members at Sandy Hook Elementary School in Newtown, Connecticut – and left elected leaders, educators and parents debating how best to keep schools safe. But it also comes as leaders in Maryland and a growing number of states are working to reduce out-of-school suspensions, which have increased greatly in the past several decades and are linked in studies to lower achievement and students dropping out of school.

Ficker attributed some of the reaction by school officials to the widespread alarm that followed the Newtown shootings. But he contended that the school system’s portrayal of the episode could be damaging to the boy. The Washington Post generally does not identify juveniles accused of crimes or other wrongdoing. “They took the worst possible interpretation of this little child’s actions, and five years from now, if he gets into a tussle, they’re going to look back and say, ‘This is one bad little kid,’ “ Ficker said.

Montgomery schools spokesman Dana Tofig said he could not discuss individual students for privacy reasons. But in a written statement, Tofig said the suspension “was not a kneejerk reaction to a single incident.” In disciplining young students, Tofig added: “We always make sure there is clear conversation with the student and parents about any behaviour that have to change and what the consequences are if that behaviour doesn’t change.” School officials recognize that “suspending a student is a serious matter, and that is especially true of a student who is in our early grades,” Tofig said, adding that school officials must deal with behaviour that affects a school’s sense of safety and security.

Across the Washington region, school systems have suspended thousands of students in the early grades, according to a 2012 Washington Post analysis that showed kindergartners and first-graders had been ousted for disciplinary offenses in nearly every local school system. In Silver Spring, Md., the 6-year-old’s parents received a December 20 letter from Renee Garraway, an assistant principal at Roscoe Nix Elementary School, saying that their son “threatened to shoot a student” and that he had been spoken to earlier about similar behaviour.

Responding to questions from the family’s attorney, school officials later offered more detail, responding in a letter that an assistant principal had warned one parent that the child’s behaviour could lead to a suspension.

At school, a counsellor “had an extended conversation” with the child to emphasize “the inappropriateness of using objects to make shooting gestures,” and an assistant principal had talked to the boy about the “seriousness” of the issue, the letter said.

“Yet, after the meeting with the counsellor and assistant principal, [the boy] chose to point his finger at a female classmate and say ‘Pow,’ “ wrote Judith Bresler, the school system’s attorney.

The boy attended school Wednesday, and school officials are considering the appeal, according to the family’s attorney. The suspension comes as the Maryland State Board of Education is preparing for a final vote in the coming weeks on proposed regulations that would transform the use of out-of-school suspension for minor offenses.

The new regulations ban zero-tolerance approaches and require school systems to adopt a rehabilitative philosophy toward discipline, with the goal of limiting suspensions and teaching positive behaviour. [WAP]