Militants driving a smashed SUV and motorbikes threw an improvised explosive device (IED) at the convoy of the The Emir of Kano, Ado Bayero, and then shot at his official vehicle, killing his driver and three of his guards, according to a military source. 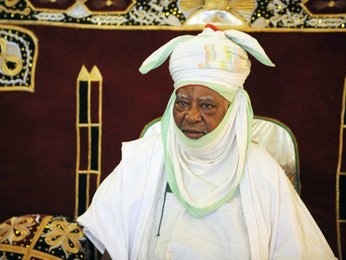 The attack took place near the Hockey Field on Zoo Road by Total Gasoline station while the Emir was returning from the launching of an Islamic school at Mussalaci Murtala.

The Emir was unhurt in the attack and has since been moved to an undisclosed location.

Mr. Bayero was reportedly saved by his driver and orderly who formed a protective wall around him and took the bullets fired at him. They are both reportedly dead.

“His driver, called Barde, and orderly were killed instantly, and his first son, the Ciroman Kano is badly injured from bullet wounds,” according to the source.

A lady whose house is not far from the scene of the attack says that a number of the emirs’ palace guards were also killed in the attack. About 10 people are feared dead from the attack.

“One of them even tried to take refuge in our house but could not succeed because the young men sitting in front of the building locked the doors after they heard the gunshots,” she said.

Some residents in the area said Nigerian troops of the Joint Task Force later took over the scene of the attack while firing shots.

JTF spokesperson in Kano, Captain Ikedichi Iweha said he was still trying to get the full details of the attack.