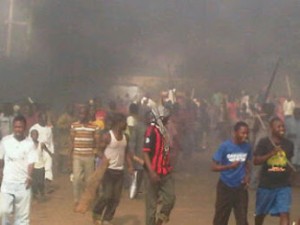 Some participants at the ongoing National Summit on Security Challenges jointly organised by Vanguard Media and the Nigeria Police summit have blamed the incessant violent crises in Nigeria on the leaders of the two major religions in the country.

A Christian cleric from Kaduna, Rev Joseph Hayab, and a Muslim religious leader, Mallam Sani Shehu, also from Kaduna State made this assertion while discussing a paper titled “Religious and Ethnic Discord as a Threat to National Security,” delivered by Prof. Sam Egwu on the second day of the summit.

Hayab and Shehu spoke separately of how leaders of the two major faiths of Christianity and Islam had blindly led their followers to conflicts.

Meanwhile, the paper brought to light how trouble makers have successfully manipulated religious and ethnic divisions in the country to achieve their violent ambitions. Discussion on the paper was largely focussed on breaking down ethnic brands and the promotion of national ideas.