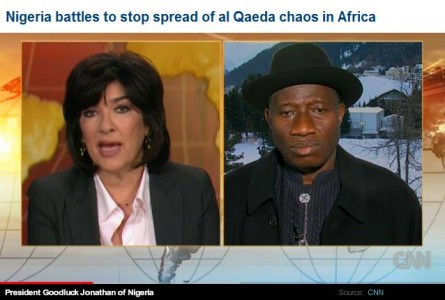 President Goodluck Jonathan’s recent interview with the Cable News Network’s Christiane  Amanpour, Wednesday night, has continued to generate reactions from all and sundry particularly, his comment that Boko Haram was not caused by poverty or years of misrule.

Jonathan was quoted as saying, “The sect was not born out of misrule, definitely not; sometimes people feel it is a result of poverty, but no. Boko Haram is a local terror group and that is why we call on the rest of the World to help us.”

In his reaction, the Executive Director of Civil Rights Congress, Mallam Shehu Sani, faulted Jonathan’s assertion that the Boko Haram insurgency was not a product of misrule and poverty.

Sani said the President’s assertion demonstrated his lack of understanding of the issue.

Sani in a telephone interview said, “What we should understand clearly is that the President is completely lacking in knowledge and grasp of the situation on the ground.

“And one comment after another, he has completely exposed his ignorance about the root causes and solution to the Boko Haram violence.

“The emergence and sustenance of the Boko Haram violence is remotely connected to the years of destruction, injustice and iniquity in the northern part of Nigeria.

“The major foot soldiers of the group are clearly people who are from the lower ladder of the society.

“It is not possible to find people who are economically comfortable engaging in violence.”

“I am sure those who are being arrested are foot soldiers only; you don’t see people from the middle class or the upper class.”