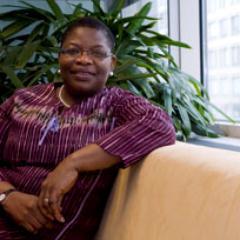 Conference of Nigerian Political Parties (CNPP) has given the Federal Government of Nigeria 7 days within which to organize a public debate between the Minister of Information, Mr Labaran Maku or any other official for that matter and former World Bank Vice President (Africa), Dr. Oby Ezekwesili.

The ultimatum is coming on the heels of the gauntlet thrown at the FG by Ezekwesili after her allegation of monumental corruption bordering on the squandering of $45 billion and $22 billion Foreign Reserve and Excess Crude Accounts respectively by the Yaradua/Jonathan administrations respectively, at the 44th convocation of the University of Nigeria Nsukka, last week.

The statement by the CNPP, signed by its National Publicity Secretary, Osita Okechukwu, reads:

We are alarmed that instead of responding to the grave allegation made by Mrs Ezekwesili the presidency tepidly said, ‘it is obviously preposterous for Mrs Oby Exekwesili to be asking for a National Debate on the outlandish and reckless disinformation she made to incite the Nigerian people against the government. This was deliberately calculated, albeit unsuccessful effort to bring the Jonathan administration to disrepute unjustifiably.’

For the avoidance of doubt many public commentators, anti-corruption crusaders and we of the CNPP had severally bemoaned the pervasive corruption in the land, the criminal squandermania of our patrimony and uncommon culture of impunity, in the last 13 years.

However, it is our considered view that this debate is germane, absolutely necessary and a matter of urgent national importance based on the fact that Mrs Ezekwesili is not an ordinary citizen, she is not only a former vice president of the World Bank, but she also served as a minister of the Federal Republic of Nigeria and once headed the Bureau of Public Procurement, under one of the most corrupt regimes in Nigeria.

Secondly and most importantly is the fact that the Minister of Information, Mr Maku also leveled allegations of monumental corruption on the former minister.

For us, corruption is a major contentious issue and there is no better time than this for the Jonathan administration to use the public debate to erase the epitaph of engraving its name in the hall of infamy as the most corrupt regime in the annals of the country.

Now that the opportunity has offered itself for the government to cleanse itself or allow the good people of Nigeria to go home with the impression that the regime is absolutely corrupt; it will be regrettable if the government denies us, indeed itself this golden opportunity.

Therefore we challenge the Jonathan administration to climb down from the high horse and embrace the debate; which more than any press conference offers them the window to wipe out the inciting information, which is gaining ground.

Also, there is no better platform for Mrs Ezekwesili to disclose her source and substantiate her grave allegations than the debate.

The debate in our view – point is a win-win scenario which indeed offers the government a rare vista to clear the lingering doubt over its commitment to war against corruption.

In sum, we challenge President Jonathan to convoke this debate within 7 Days or we stand on Mrs Ezekwesili’s allegation to prosecute the government for unbridled and wanton looting of the national treasury.