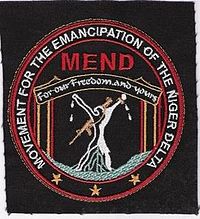 If the discordant tunes coming out of the Niger Delta among leaders of the defunct Movement for the Emancipation of the Niger Delta, MEND, is anything to go by, then the purported presidential ambition of Dr. Goodluck Jonathan in 2015 may have splitted the ranks of these former gang leaders.

In recent weeks, prominent militants; Asari Dokubo, Ebikabowei Victor-Ben(Boyloaf), Ateke Tom and Pastor Reuben, have expressed doubts over the ability of president Jonathan to win re-election in 2015 over what they believe is his non-performance so far.

But one of the key commanders of the defunct MEND, Chief Bibopiri Ajube, alias General Shoot-at-Sight, has advised government not to succumb to blackmail by his ‘compatriots’, alleging that the comments of the ex-militant leaders were borne out of ‘failed expectations’.

Ajube, who was reportedly the operational leader of MEND in a statement said, “Asari, Boyloaf, Ateke and others have lost the goodwill and character expected of leaders of freedom fighters”.

The statement read in part: “I am particularly amazed at some media reports to the effect that certain leaders of ex-freedom fighters have now resorted to smear campaign in the media against some targeted officials of the Federal Government, including President Jonathan.

“In all honesty, I do not hold brief for such government officials, however, as a matter of morality and conscience, it behoves on me to put the records in proper perspective.

“Boyloaf, Ateke Tom, Farah Dagogo and a few others either deliberately inflated the actual number of disarmed youths under them or shamelessly defrauded such youths in connivance with some bank officials by deducting from source illegal sums from the meagre monthly N65,000 stipend.

“Today, it is either that the boys feel cheated and vent their anger on the ordinary Niger Deltan, thereby heightening insecurity in the region or they have confronted most of these leaders mentioned above to the extent they no longer go to their respective communities. The noise about third phase amnesty is the consequence of this unfortunate development.

“As if this is not painful enough, these compatriots of mine also later became beneficiaries of the NNPC pipeline security contract. The idea of the deal was that all such jobless youths who did not partake in the amnesty programme be meaningfully engaged.

“It is, therefore, very sad that people like Asari Dokubo, Farah, Ateke and Boyloaf decided to show the failed side of leadership in this noble direction because in spite of the millions of naira paid to them by NNPC, they refused to justify the huge payments. They are the least qualified to label anyone as fraudulent and non-performing as they have done in the past few weeks.

“I submit that not only must they account for the huge sums given to them for job not done, the Federal Government should not renew the pipeline security contracts given to them because the contrary (renewal) can only send a dangerous signal of indulgence of corruption”.