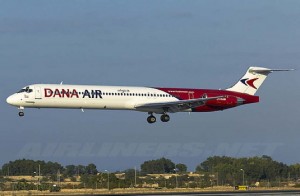 Dana Air has eventually resumed operations on Friday, seven months after the revocation of its licence. This was confirmed by Mr Kayode Adeniran, the Station Manager of the airline, at the Nnamidi Azikiwe International Airport, Abuja.

According to Adeniran, one of the airline’s refurbished planes, MD 83, which made the first flight on Friday, departed Abuja for Lagos at about 7:20 am local time with 90 passengers on board. It would be recalled that the aviation authorities revoked the Dana Air operation licence following the June 3, 2012, crash.

However, in order to woo customers, Adeniran said that the company had slashed its fare and had also trained its entire staff to ensure safety. The station manager further explained that the airline decided to reduce its fare to a minimum of N9, 000 and maximum of N22, 000 to regain customers’ confidence adding that the airline had met all necessary standards required by the Nigerian Civil Aviation Authority.

According to him, four aircrafts had been added to the functional two which the company had before the crash. “Our aim is to assure our customers of safety by upholding the standard we laid down in 2008 when we first started operations in Nigeria.