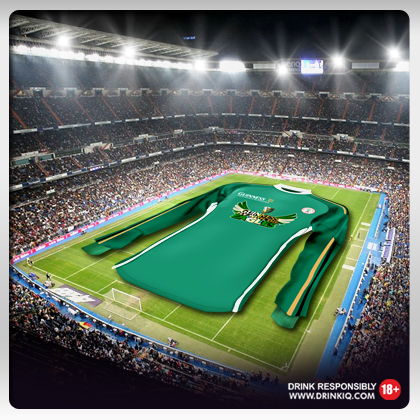 Guinness Nigeria Plc. on Monday ended its historical signing of the largest Super Eagles Jersey at the Teslim Balogun Stadium, Lagos, as the jersey left for South Africa.

The Marketing Manager of Guinness, Obinna Anyalebechi, that the jersey left for South Africa for fans there to append their signatures on it. Guinness made the jersey for fans to sign on and support the national team at the ongoing 29th Africa Cup of Nations (AFCON).

“We started this journey of fans signing on the largest Jersey ever produced because we want to draw the necessary support for the Super Eagles.

“We believe in their ability to win the cup. This is also part of our social responsibility to the community.

“The jersey, with the size of 275.5 by 245.9 square metres, weighing 2.4 tonnes, was immediately covered with signatures in the five days it was in Lagos,’’ Anyalebechi said.

The five-day event that started on Jan. 21, had to be shifted by two days, which ended on Sunday.