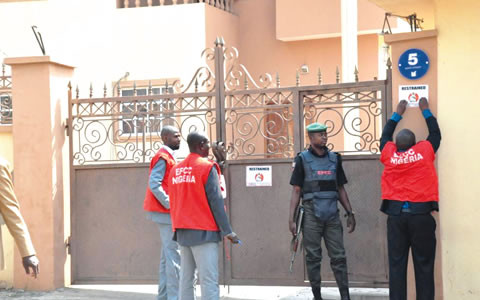 The long arm of the law is gradually catching up with former governor of Bayelsa state, Mr. Timpre Sylva as the Economic and Financial Crimes Commission on Thursday, took possession of 48 properties belonging to him .

Sylva is presently standing trial at a Federal High Court in Abuja for alleged N6.46bn fraud. His first arraignment was on Tuesday, June 5, 2012.

Confirming the development in a statement, the spokesperson for EFCC, Mr. Wilson Uwujaren, in Abuja said the interim forfeiture was informed by a court order granted by Justice A. R Mohammed last December 21.

Three of the six counts against Sylva reads, “That you, Timpre Sylva, as Governor of Bayelsa State, with others now at large, sometime between October, 2009 and February, 2010, at various places in Nigeria, including Abuja, within the jurisdiction of the Federal High Court did conspire to commit a crime to wit: conversion of properties and resources amounting to N2bn belonging to Bayelsa State Government.”

The substantive suit had been adjourned till Thursday, January 10, 2013.