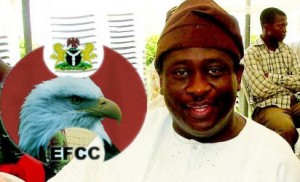 Alas! The Economic and Financial Crimes Commission (EFCC) has declared the Chairman, Bi-Courtney Highway Services, Wale Babalakin, wanted over the N4.7bn money laundering charges instituted against him at a Lagos High Court, Ikeja.

The EFCC in a statement on Wednesday alleged that Babalakin has suddenly disappeared, a development that might have bungled his scheduled arraignment on Thursday (today), which had earlier been stalled in two previous occasions by his absence from court. The EFCC’s Acting Head, Media and Publicity, Wilson Uwujaren, in statement alleged that Babalakin “has gone underground” as the businessman was said to have failed to report at the commission’s office in preparatory for his arraignment along with others today (Thursday).

Uwujaren stated, “The businessman, who was supposed to report to the commission today preparatory to his arraignment on 27 counts criminal charge before Justice Adeniyi Onigbanjo of the Lagos High Court tomorrow, January 17, 2013 failed to do so, and has gone underground. Babalakin is dark-complexioned and speaks English and Yoruba fluently.”

However, Babalakin, who spoke through one of his aides, Dipo Kehinde, on Wednesday, denied fleeing from trial, saying he had earlier had an understanding with the EFCC at 5pm not to report to its office until Thursday morning. According to him, instead of reporting at the office on Wednesday, he had been told by the commission to present himself at the it’s office on Thursday morning before proceeding to court.

While on admission at the Lagos University Teaching Hospital, Babalakin, through his counsel, Mr. Wale Akoni (SAN), successively instituted two suits before the Federal High Court, Lagos, to prevent his arrest and trial by the EFCC. Both suits were dismissed paving the way for his arraignment, and forcing Babalakin to subsequently surrender to the operatives of the EFCC detailed to the hospital premises to watch over him to prevent his alleged escape.