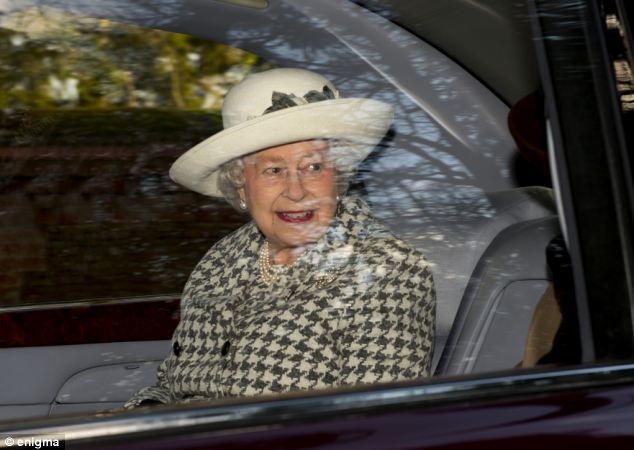 The Queen was left waiting after a church service in Sandringham, Norfolk After seven attempts her driver was finally able to start the car

The Queen was left waiting as her red-faced chauffeur failed to start her luxury Bentley after a church service today.

The 86-year-old monarch chuckled as she waited for about a minute as her driver desperately tried to start her claret-coloured Bentley in Sandringham, north Norfolk.

The car finally started after a seventh attempt outside St Mary Magdalene Church, a quarter mile drive from Sandringham House, where she is spending her traditional winter break with Prince Philip, 91.

Car trouble: After several failed attempts to start her Bentley, the Queen’s driver finally managed to start the car to drive her back to Sandringham Estate after a church service today

Prince Philip walked to and from the church service as normal in the freezing weather with guests including Lady Helen Taylor, 48, the daughter of the Duke and Duchess of Kent.

Veteran Royal watcher Mary Relph, 77, of Shouldham, Norfolk, who was at the church, said: ‘I have never known anything like this happen before.

‘The car wouldn’t start for quite a while. It did eventually and when it did, the Queen said “don’t stop it, don’t stop it”. 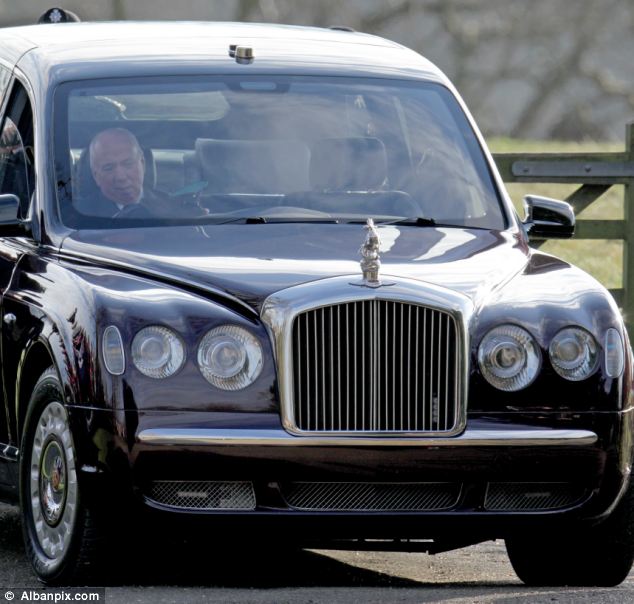 Driver’s deliberations: It took the Queen’s chauffeur seven attempts to get her Bentley started outside St Mary Magdalene Church

‘I think she must have been worried that it might conk out again. She was laughing about it.’

The car used by the Queen today is one of two purpose-built Bentley state limousines which she owns.

The commotion happened in front of a crowd of 150 well-wishers after the 55 minute morning service at the estate church. 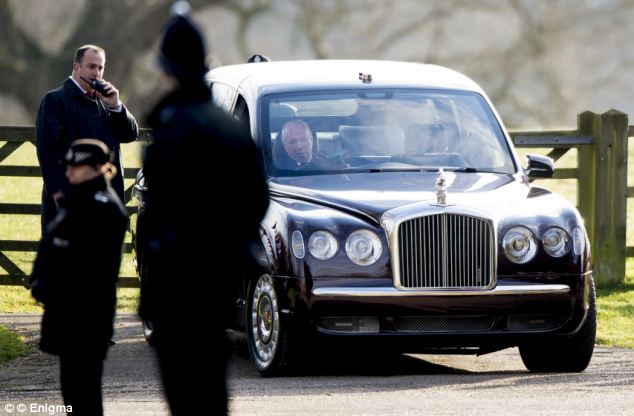 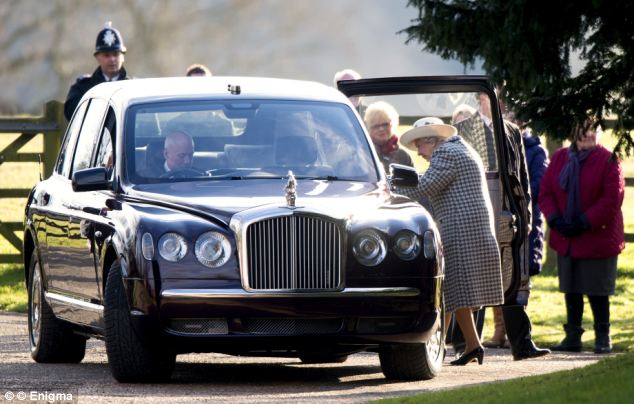 Time to go: Eventually the car started, much to amusement of the Queen, who was at the church for a service

The chauffeur tried to start the car after the Queen left the 16th century church and collected flowers from around 30 children. 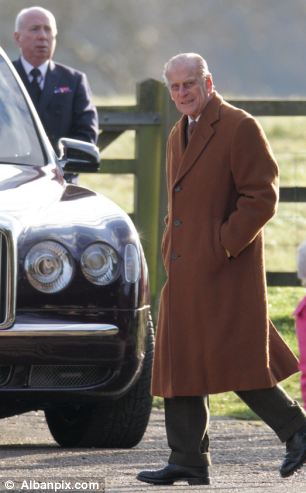 On foot: Prince Philip, also at the service, walked the quarter mile to and from Sandringham House to get to the estate church

Another onlooker said: ‘The chauffeur looked really embarrassed and worried when the car would not start.

‘The Queen was just standing there a few metres away and pointing at the car.

‘The police were beginning to panic a little and I heard them talking about implementing plan B and bringing another car to drive the Queen away.

‘It was a great relief all round when the car started.

‘It is the same car that she uses every week to drive to church. It is anyone’s guess why it wouldn’t start. Maybe it was the cold weather.’

The Queen and Prince Philip arrived at the 20,000 acre Sandringham Estate before Christmas for their winter break.

They were joined over the festive period by several members of the Royal family although the Duke and Duchess of Cambridge visited only briefly as they spent Christmas Day with her parents.

Prince Harry was also missing from Sandringham this Christmas as he is serving as an Apache helicopter pilot with the Army Air Corps in Afghanistan.

The Queen and Prince Philip traditionally stay on the estate until after February 6, the anniversary of her ascension to her throne when her father King George VI died on the estate.

The date ensures they are able to attend as many pheasant shoots as possible as the shooting season lasts until February 1.

Break time: The Queen and Prince Philip arrived at Sandringham Estate (pictured) before Christmas for their traditional winter break and will stay until February 6
MAILONLINE