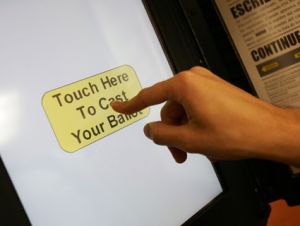 The Action Congress of Nigeria (ACN) has condemned what it called the “determination of its (Nigeria) elections to a few ‘wise’ men and women on the bench” and said it is time for the country to embrace electronic voting in order to ensure the integrity of its elections and hand over the elections back to Nigerians.

In a statement, Sunday, by its National Publicity Secretary, Alhaji Lai Mohammed, the party listed the benefits of electronic voting to include: reduction in the overall cost of elections; stability in the polity, the disappearance of an atmosphere of war usually associated with elections and the reduced role of security agencies in the election process.

Although the party recognized that Section 52 sub-section 2 of the Electoral Act bans the use of electronic voting “for the time being”, it urged the National Assembly to move quickly to amend that part of the law, while also calling on the Federal Government to provide INEC with all the resources needed to make electronic voting a reality.

“We assure INEC of our full support towards using electronic voting in 2015. We also appeal to all other political parties, Civil Society Organizations and indeed all Nigerians to join us in pushing for a system that will eliminate the role of thugs and sideline vote thieves during our elections, in addition to making our elections free, fair and credible.

”While electronic voting is not a magic wand, it is the surest way yet for Nigeria to join the league of countries that have wiped out electoral fraud, which is the worst form of corruption. It is also the best way to hand over Nigeria’s elections back to Nigerians, instead of having the judiciary determine who wins what contest. Two years is a long enough time to achieve this,” ACN said.

While the ACN noted that neighbouring west African country, Ghana, organized what could be termed perhaps the best elections in this part of the world using electronic voting, it called on the leadership to tow the same path by shedding the ‘toga of electoral fraud and brigandage.

“It is not just enough for us to sit back in envy while the world hails our neighbour Ghana for being a model in electoral rectitude and participatory democracy. Let us ask ourselves what we need to do differently to shed our

“Yes, there were some hiccups during the last elections in Ghana, which were conducted with electronic voting. But Ghana quickly moved to correct whatever problems came up. The system also allowed Ghana to extend voting without fearing that ballot boxes will be hijacked or stuffed,” it sad..

ACN said while it is true that Ghana’s last presidential election that was conducted with electronic voting is currently being challenged in court, “to the best of our knowledge, that’s the only case being contested in court since the elections ended. Compare this with Nigeria, where many cases emanating from the 2011 elections are still in court, almost two years later.

“It is totally unacceptable and indeed an anomaly for a nation of 160 million people to hand over the determination of its elections to a few ‘wise’ men and women on the bench. One result of Nigeria’s successive failed elections is that it has brought corruption to the judiciary. It is time to free judges to do their duties and allow Nigerians to play more role in determining who governs them,” it said.