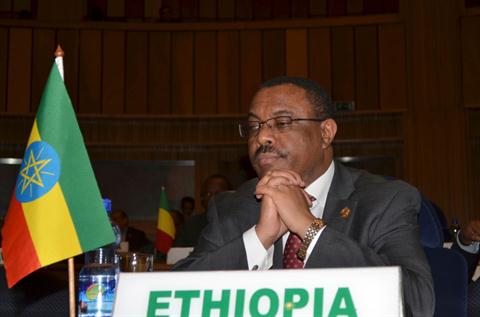 “It is with a great sense of honour and humility that I accept the chairperson of our union,” Hailemariam told leaders at the AU summit meeting.

“I wish to express my heartfelt thanks for the opportunity to serve this half-a-century-old organisation for the next one year.”

Yayi, the outgoing AU chair, hugged Hailemariam and said he will “succeed brilliantly in his mission in pushing us forward in our agenda for unity, peace, stability and development of our continent”.

The 47-year-old Hailemariam, who became leader of Ethiopia after the death from illness of Prime Minister Meles Zenawi in August 2012, will serve a one-year term as head of the African Union.

The 54-member continental bloc’s assembly is meeting in Ethiopia’s capital, Addis Ababa at a time when the AU faces several security challenges on the continent, including rebellions in Mali, eastern Democratic Republic of Congo and the Central African Republic, and continuing tension between South Sudan and Sudan which have failed to implement agreements on borders.