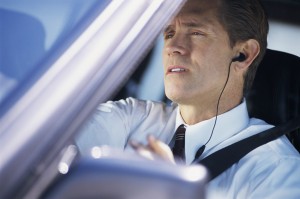 A leading UAE psychologist has however said that the use of hands-free sets could lead to “attentional blindness” among drivers and many accidents.

Dr Taha Amir, UAE University professor of psychology, said there is a “mistaken belief” that the use of hands-free mobile phones while driving reduces road mishaps compared to using handheld mobile phones.

In the latest issue of The UAE Psychologist, a bi-annual newsletter, he cited research which shows that conversing with a hands-free mobile phone is a cause of “significant distraction” and is much more distracting than conversing with a fellow passenger.

Attentional blindness is defined as a result of a process that consumes significantly more “attentional resources” than deciphering natural sounds received in a face-to-face conversation.

“Some people think that since using hands-free does not engage sight, one can focus on the road while using it. But this is not true. Our research shows that the cause of distraction is the process of deciphering degraded sound conveyed over the mobile phone.”

Dr Amir said their experimental study was run in the psychology lab of the UAE University in Al Ain and involved 244 male and female subjects (aged 19 to 60). Their conclusion: Using hands-free mobile while driving results in “attention trade-off”, with potentially disastrous consequences.

“This study shows that attention is a limited capacity reservoir,” Dr Amir said. “When two tasks, like driving and conversing over the phone, compete for attentional resources, they ‘trade-off’. If one takes more, the other takes less,” he explained.

Dr Amir told Dubai XPRESS that even a hands-free conversation while driving must be totally avoided “because engaging in a conversation on a mobile phone while operating a vehicle is very risky. It is good that there is a law against this practice. But the media should raise public awareness.”

Dr Amir said that sounds carried over wireless telephones are severely degraded as they go though many stages of manipulation before being transmitted.

“Sound [transmitted over phone networks] is sampled. These samples are converted to a digital stream of ones and zeros. This stream of bits is then modulated to be squeezed into a very narrow frequency slice to be transmitted.”

“Obviously the person does not need to do this if he is talking with the other person face to face,” he said.

Driving requires both sensation and perception. Sensation is registering a signal (image, sound, chemical, etc) in specialised neurons or nerve cells in a sense organ (the eye, ear, nose, etc). Registering a light signal in the neurons of the eye is not enough for “seeing” as the signal needs to be perceived — organised and interpreted — to be meaningful and useable.”

For perception to take place, attentional resources are needed. This, however, will not be available if this person is not only engaged in a phone conversation but is also deciphering degraded sounds. Since this process consumes a lot of a person’s attentional resources, it leaves very little for the road ahead.

In Nigeria, more awareness should centre on why it is very important for drivers to be very attentive when driving as this can greatly reduce road accidents.

A telecommunications giant in Nigeria runs an advert where a lady calls a man and he replies with “I can’t talk. I’m driving. Send a text.” Well, the advert didn’t say if the man intends to read the text later or he was going to read it immediately it comes in; they got us there. Whatever the advert means, it is very important for drivers to try as much as possible not to engage in activities that could distract them from the road while driving.