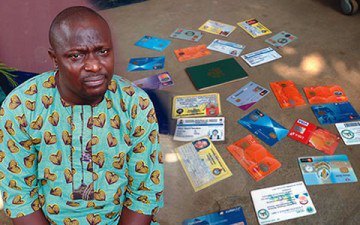 The Police in Lagos on Monday arrested a Facebook lover for defrauding his lover of N200,000.

The Police said in Lagos that the suspect posed as a medical doctor to enable him swindle his unsuspected facebook girl- friend. The suspect claimed he would use the amount to secure a job for her with the Nigerian Customs Service.

Parading the suspect (names withheld), the Police spokesperson, Lagos state Police Command, Ms Ngozi Briaide, said the accused was arrested and charged to court about three years ago for a similar offence.

Ngozi stated that the police could not immediately explain how he was freed in court without being convicted, noting that the suspect had become a serial fraudster who was in the habit of defrauding young girls.

According to her, the 36-year- old suspect was arrested after one out of the latest five victims complained to the Police on Nov. 15, adding that the suspect was thereafter arrested on Dec. 23 by detectives from Ogudu Division.

The spokesperson alleged that the first victim, Mrs Adebiyi Adenike, a graduate became his friend on Facebook after being attracted by the suspect as a Surgeon.

”He requested for the sum of N200,000 as PR and with her original certificate to enable him secure employment for her into the Customs and that he had a slot at the service,” she said.

Ngozi stated that both the suspect and the victim met and set out for the journey to Abuja, but along the way to Air Port, the suspect pretended as if his vehicle had fault and asked her to come down and push the car. ”

As soon as the victim pushed the car, he zoomed off with the victim’s credentials, ATM and PHCN cards,” she said. Ngozi gave the names of other victims defrauded by the suspect as Miss Okunola Folashade, Miss Ibrahim Bukola and Miss Adefemi Mercy.

She said that they were all NYSC members who were defrauded by the same suspect on their way to Ibadan for community assignment.

The spokesperson alleged that they boarded his car to Ibadan on Dec. 20, but on getting to the Tollgate, the suspected diverted to the old Lagos/Ibadan road where he pretended as if the car developed fault and asked them to push thereafter he zoomed off with all their belongings.

The fifth victim, Miss Akinbo Atinuke, also boarded the suspect’s vehicle at Berger on Dec. 11, on her way to Ibadan, where the accused branched to a filling station and pretended the car could not start again, adding that the victim also pushed the car and he zoomed off.

The spokesperson said that the victim also lost her Laptop, Phone, SSCE Certficate, ATM card, NYSC discharged certificate, the sum of N104,000 which she withdrew from a bank with her ATM card.