Fantastic! PHOTOS: The Invention of an Anti-Molestation Female Condom 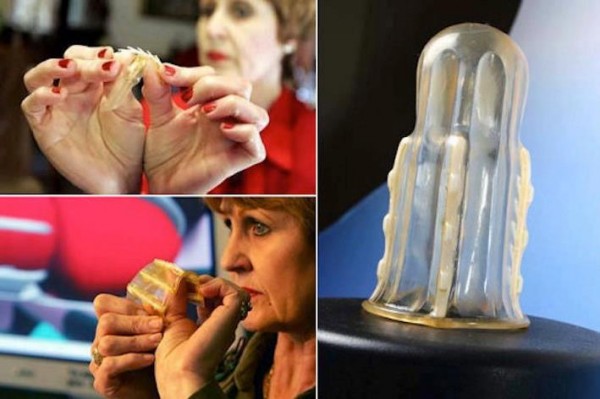 Ehlers was motivated to create it while working as a blood technician with the South African Blood Transfusion Service, during which time she met many rape victims.

Ehler mentioned that she was inspired to create RAPEX (later renamed to Rape-aXe) when a patient who had been raped stated, “If only I had teeth down there,” suggesting the myth of the vagina dentata. Initially called RapeX, the name was changed in 2006 upon discovering that RAPEX is also an EU warning system against dangerous goods on the market.

The Rape-aXe is a latex sheath embedded with shafts of sharp, inward-facing barbs that would be worn by a woman in her vagina like a female condom. If an attacker were to attempt vaginal rape, his penis would enter the latex sheath and be snagged by the barbs, causing the attacker excruciating pain during withdrawal and giving the victim time to escape. The condom would remain attached to the attacker’s body when he withdrew and could only be removed surgically, which would alert hospital staff and police.

Like most condoms, Rape-aXe also usually prevents pregnancy and the transmission of HIV and sexually transmitted Infections. Rape-aXe was unveiled on August 31, 2005 in South Africa. Although media coverage at the time implied that mass production was due to begin in April 2007, the device has never been marketed to the public and it remains unclear whether the product will ever be available for purchase.

Critics have accused her of developing a medieval device to fight rape. “Yes, my device may be a medieval, but it’s for a medieval deed that has been around for decades,” she said. “I believe something’s got to be done … and this will make some men rethink before they assault a woman.”

A Woman Who Doesn’t Like Money Is Not An Asset: Reno Omokri

Reno Omokri, a former aide during the Goodluck Jonathan led administration, has taken out time to dish out relationship advice to men. According to the...
Read more

The Oluwo of Iwo, Oba Abdulrasheed Akanbi Telu is of the opinion that his culture, Yoruba is no longer in tune with times. The monarch...
Read more

Social media guru, Reno Omokri is of the opinion that people should quit celebrating their birthdays as it makes no sense. According to the author...
Read more
- Advertisement -