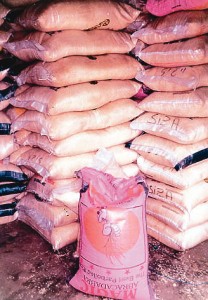 Minister of State for Agricultural and Rural Development, Dr. Bukar Tijani has informed Nigerians the country will stop importation of rice by 2015.

The minister made this known while flagging off the distribution of Paddy Rice to farmers in Lokoja, Kogi State, on Tuesday. Tijani said the feat would be achieved with the all-year-round production of rice in the country.

He, however, commended the Kogi State government for its commitment towards the rice value-chain in the transformation agenda of the Federal Government, saying Kogi State had comparative advantage in rice production. The Minister explained that Kogi was among the 10 states listed for the programme aimed at increasing rice production in the country, pointing out that the state was also part of the states that would benefit from the flood recovery scheme and dry season farming programme of the Federal Government as well as receive rice mills to add to its value chain in rice production.

He also said that each farmer would get three bags of paddy rice and a bag of fertilizer free of charge from the Federal Government in a bid to boost production of the commodity.