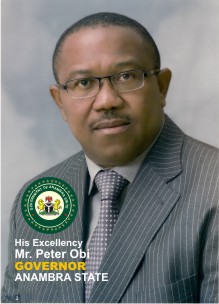 Anambra State Governor, Peter Obi, who had to cut short his overseas trip upon hearing the news of floating corpses on the Ezzu River bordering Anambra and Enugu States on Saturday, has offered to pay N5m to anyone that can give information that will lead to the source of the unidentified corpses.

Obi made this announcement when he visited the scene on Sunday. He described the killing and dumping of the corpses as barbaric and shocking.

“What happened here is unacceptable in any decent society. Human life and blood is scared and all of us must respect the sanctity of human life” he said.

While pleading with residents of the two communities bordering the river, Amansea in Anambra State and Ugwuoba in Enugu State, to desist from fetching water from the river until the corpses were cleared from the river, governor Obi said the two states would investigate the incident, adding that the police had been directed to move in their homicide team and recover the bodies.