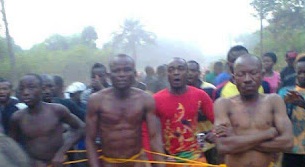 The Imo State Police Command on Thursday in Ekwe Village in Umuaka in the Njaba Local Government Area of the state.

Confirming the arrest, the Imo state Police Public Relations Officer, Mr Virgilus Onugwu, said that the suspects had made confessional statements and would soon be charged to court for the offence which carries 14 years jail term if convicted.

Debunking reports that the suspects were lynched as widely rumoured, the spokesman said they were arrested following a quarrel between two of them, during which they accused each other of being homosexuals.

He also said that investigation had been stepped up for the arrest of those behind the killing of Mr Laz Anyanwu, the Director of Protocols in the deputy governor’s office.informationng.com reports that Anyanwu was kidnapped in Owerri on Jan. 11, and later found dead on a bush path in Nworiebe in the Mbaitoli Local Government Area of the state on Jan.14.