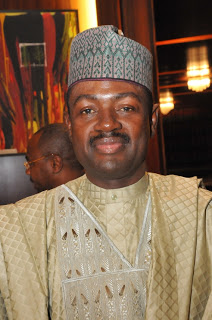 The Borno State government has warned the Information Minister, Labaran Maku, against the planned Good Governance Tour (GOGT) to the state, as the Federal Government has “neglected and abandoned” the state for over a decade without any completed or on-going federal project in Borno to warrant this week’s tour.

Disclosing the state government’s position on the tour which has seen the Information Minister visit most states of the federation, Commissioner for Information, Inuwa Bwala, in Maiduguri, said the warning became imperative because Maku’s GOGT to Borno State was nothing, but a “cover up” for the Federal Government’s inadequacies in fixing the dilapidated 2,896 kilometres of federal roads and abandoned water and environment projects at Biu and the Lake Chad Basin Areas.

In his words: “Maku’s tour team has no business visiting this state, as there is no single project – on-going or completed – which was executed by the Federal Government in Borno, that it could inspect.”

Bwala said the Tour to the state would rather remain “a tea party as it does not in any way represent the yearnings and needs of the people of Borno who had been abandoned by the Federal Government in most of the times they needed their presence.”

He further urged the Federal Government to stop paying lip-service to the issue of development and treat all the 36 states fairly irrespective of their parties’ differences.

“All we have here in Borno are projects executed by the state government and I don’t think a Federal Government team will come to a state and inspect projects that it had not committed a dime in their execution,” said Bwala.

“For many years now, Borno State has been battling with insecurity of lives and property, flood and so on, but neither the Presidency nor its top aides had deemed it fit to visit us as a people, so what makes them think we need them now?”, he queried.

Bwala further disclosed that the only Federal Government projects existing in Borno are the Biu Dam, the 567-kilometre Maiduguri-Kano road, the Chad Basin Development Authority (CBDA) and the 2,896-kilometre dilapidated federal roads that were quoted in several budgets but have long been abandoned in the state.

He, therefore, wonders what else they (Maku tour team) are coming to inspect in Borno State that is of Federal Government’s interest.

The commissioner said: “They should stop using this Good Governance Tour to cover up their inadequacies. We would rather advise that the money spent on this could be channeled in executing basic developmental projects in a Federal Government neglected state like Borno”.