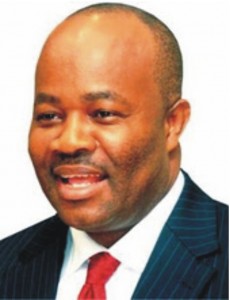 Akwa Ibom State Governor Godswill Akpabio on Saturday joined officials of the Federal Road Safety Corps (FRSC) to rescue victims of an accident which occurred on the Lagos-Ibadan Expressway.

Speaking to the News Agency of Nigeria, NAN in Abeokuta, FRSC Commander in Ogun state, Ayobami Omiyale said that the accident occurred at Km 46 of the expressway.

According to the sector commander, 14 people were seriously injured when the tyres of a commercial Volkswagen bus marked LAGOS AGL 241XA, busted while on top speed.

“The accident happened in front of the Redeemed Camp; Gov. Akpabio, on his way to attend a reception for Chief Obasanjo in Abeokuta, was behind the bus when it somersaulted.

“He immediately stopped to rescue the victims; in the process, our team from Mowe Unit arrived at the scene. He (Akpabio) followed the victims to Olabisi Onabanjo Teaching University Hospital (OOUTH), Sagamu. He gave them N500,000 for their treatment and also gave the FRSC team N200,000 for the prompt response.’’

Omiyale, while commending the FRSC team for the timely intervention, urged other Nigerians to emulate the governor.

The sector commander also advised motorists against buying used tyres (Tokunbo), saying that most of them were already expired before getting into the country.