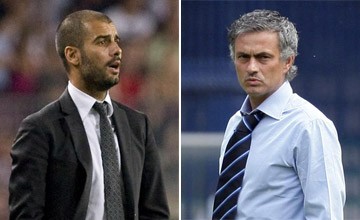 The ‘Special One’ has again reignited his rivalry with former Barcelona coach, Pep Guardiola, by insinuating the recently hired Bayern Munich coach is scared of him. Jose Mourinho, who was previously embroiled in an intense rivalry with the Spanish tactician while in charge of Barcelona between 2008 and 2012, gave this indication after being quizzed to comment on Guardiola’s move to Germany.

The Real Madrid boss, 42, insisted that Guardiola’s switch to Germany does not concern him, and neither does he intend to ever follow in his former opponent’s footsteps.

“I have no comment to make, everyone is entitled to their choice,” said Mourinho.

“Has he deliberately chosen a league I am not involved in? I don’t know. What is certain is that I will not manage in Germany.

“I have nothing to say on the matter, it is all the same to me.”

Information Nigeria recalls that Pep Guardiola who is on sabbatical from the game of football, was recently appointed by the German club and will succeed Jupp Heynckes in the summer.