Three sons of Chief Essien Akpabio and Mrs. Atim Akpabio, siblings of a prominent Nigerian movies producer and gospel musician, Evangelist Helen Ukpabio, of Mente Village, Nkari Clan, were allegedly killed on March 25 last year by a security team consisting of the State Security Service (SSS) agents on the same day, Ini Local Government Area of Akwa Ibom state. The family had also lost a daughter a few days later who died from shock after learning about what happened to her brothers. While the family were yet to comprehend the reason why fate should treat them that way, they never envisaged that the another misfortune will befall them soon again. 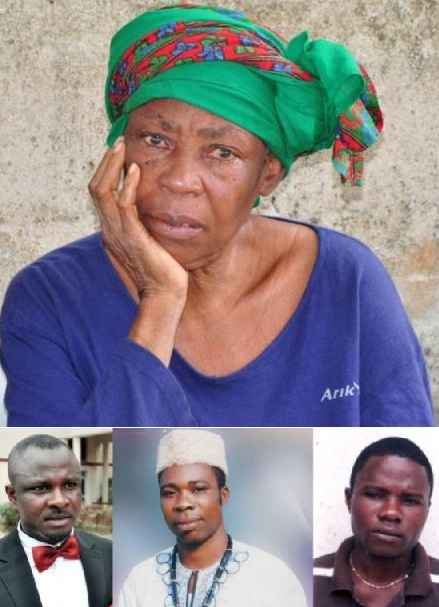 Barely eight months after losing the three sons and a daughter, who was said to have collapsed and died upon receiving the news of her brothers’ death, the Akpabio’s clan has also lost Mrs. Atim Akpabio to the cold hands of death, allegedly from a heart attack that came a result of the unfortunate incident that befell her.

The late Akpabio, also the mother to the Nollywood producer-turned evangelist, Helen Ukpabio, family members said never recovered from the shock caused by the incident. The aged mother died a very unhappy woman in November last year while waiting with pains to get justice for her children.

“They were wrongly accused of a crime they didn’t commit. The police took laws into their hands and killed them before they even had a chance to defend themselves.

“We are already pressing charges, and my only surviving brother, Henry, a businessman abroad, is the one representing the family’s position. They were killed right in front of our mother, even as she was protesting on their behalf, after they had already been shot in the legs to cripple them. That was exactly on the 25th of March, 2012,” Helen Ukpabio said in a recent interview.

Ukpabio, who is also the founder of Liberty Foundation Gospel Ministries in Calabar, was trying to put the deaths of her sibling behind her when her mother also gave up the ghost in November last year.

Relating what must have led to the killing of the three brothers, the attorney to Chief Essein Akpabio (the father of the three slain brothers), Mr. Victor Ukutt revealed that the brothers were killed over a N500 million payment as compensation to their family, which owns over 80% of a parcel of land on which a Dam is being constructed in the Nkari community.

“Our findings indicate that Chief Essien Akpabio, father of the three slain brothers, owns 80% of the total land mass where a Dam is being constructed in Nkari clan and the Federal Ministry of Water Resources had approved about N500,000 as payment of compensation to the owners of the land where the Dam is being constructed,” Ukutt said.

He alleged that the State Security Service Agent, led by one Mr. Noel Nduka were hired by some persons to eliminate the family of Chief Essien Akpabio in order for them to take possession of the compensation in respect of the land on which the Dam is being built.

“At the moment, the SSS and killer armed men are still hunting for Chief Essien Akpabio and the daughter, Helen Ukpabio for elimination in order for them not to have any challenge in the sharing of the Dam compensation.”

He said further that the Akpabio family has been frustrated by the authorities in bringing the felons to justice.

“First, the police in Uyo had initially refused to grant audience to Evangelist Ukpabio (elder sister to the slain brothers) in respect of the matter. It took an a uphill task before she was allowed to see the Commissioner of Police, Akwa Ibom State,” said the lawyer who appealed that the state government should order the arrest and prosecution the felons, which it has failed to do all this while.

Ukutt lamented that it was consequent upon the frustrating moves by the Police, SSS and the government to bring these felons to justice, that the matriarch of Akpabio family, Mrs. Atim Akpabio lost faith in the Nigerian system and consequently had an heart attack that led to her death in November last year.

On behalf of the Akpabio’s family, he implored the President of the Federal Republic of Nigeria to direct the Inspector General of Police to beef up security around Evangelist Helen Ukpabio, her aged father, Chief Essien Akpabio and the remaining members of the family “as the killer squad would do everything possible to conceal any evidence or eye witness in respect of the dastard murder.”