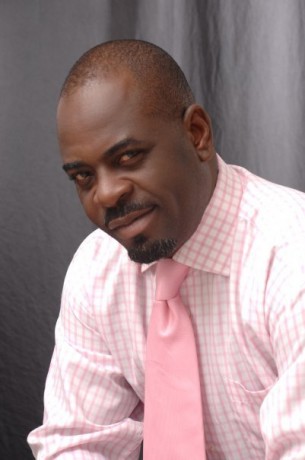 Funsho Adeolu is not one to be toyed with, especially concerning professionalism.

Nigerian Entertainment Today met with the 45-year-old actor at a movie location in Ikorodu, and he spoke candidly on why he has been absent from English movies, and why Yoruba movies and actors are not in the spotlight like their English counterparts.

Let us start with your assessment of the Nigerian movie industry.

There has been a lot of improvement. At the moment, we don’t have a control agency, [which] is why we see some very funny things on TV, but when I started acting, the kind of cameras we used and technical know how we had was nothing near what we have now. We use very high-tech cameras now, the latest cameras they use overseas. We are progressing.

Is the industry lucrative?

It is very lucrative, [and] that is why everybody is coming in. The fact that it is lucrative is the reason there are so many people in the industry, and that has resulted in the lack of control in the movie world. These people wouldn’t have come in if there was no money.

You started out with soap operas but have not done those lately. Why is that?

After starring in Palace, then Super Story and later Family Ties, it will be difficult for me just to do anything lesser. If good work comes, I’ll be there. When the era of soap operas started, there weren’t many on the TV, but now we have so many soaps on TV, appearing in all of them would only make me lose my worth.

Why have you been absent in English movies these days?

When I started out, I always had an eye for professionalism and respect for the profession. I have always had an eye for perfection in everything I do. I like to be in the midst of people that are professionals. Even at that time, when I was in English [movies], I never worked with anybody apart from Tunji Bamishigbin, Jimi Odumosu, Tade Ogidan, and the likes. During that period, I got offers from others but I always declined.

Because they were not professionals. Theirs (Igbo filmmakers) is usually a case of somebody who started as a production assistant and in a year, claims to be a director. I had a standard and used to refuse their offers, but when it got to a point, all the people I mentioned (Tunji Bamishigbin, Jimi Odumosu and Tade Ogidan) left movies for soaps, and as an actor by profession, I had to eat. Antar Laniyan was the one that advised me to try Yoruba movies.

Is it true that there is a disparity between Yoruba and English speaking actors and why is this so?

Maybe because of the standards these days for Yoruba actors, naturally, there is bound to be a small complex, and as it is over there, if you do not showcase yourself, nobody will see or think you can do anything. Some people who saw me on Family Ties were surprised, forgetting I was a major character in Wale Adenuga’s Super Story. If a Yoruba actor doesn’t try to show him or herself in any English speaking movie or soap, nobody will know they can speak English, but we have more read people in the Yoruba movie industry more than English.

Are there English actors you admire?

I admire Olu Jacobs and his wife [Joke Silva], Bimbo Manuel, RMD, Genevieve, Ramsey Noah. The Yoruba [actors] Yomi Fash Lanso, Antar Laniyan, Funke Akindele, and Fathia Balogun. We have a lot of them, but if I mention too many people, I’ll step on toes.

Of all the movies you have ever acted in, which has been the most memorable?

Iyan Ogun Odun, and that is because of the role I played. I couldn’t have done it for money but for acting, I’ll do anything apart from getting naked and having sex on set.

What would have been your reaction, should that have happened to you in real life?

I’drun away. Far away from everybody, I wouldn’t even try to look at her because if I did, I would have forgiven her.

It has been eight years since you got married, how has the journey been so far?

In my home, there’s real love, and that is why I’m saying there’s no love; a lot of people don’t know what love is. These days, a lot of people don’t get married because of the love, they do it because they have to be married or because of the wealth involved or the person is pregnant and the marriage, forced. Mine has been great because I got married to my friend, we dated for eight years and it has been awesome till date.