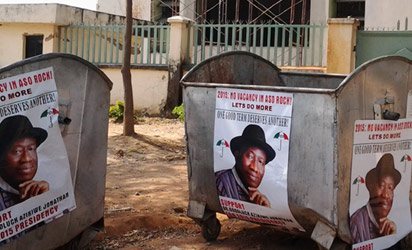 The nation’s capital, Abuja, yesterday, was jolted to the sight of campaign posters bearing President Goodluck Jonathan’s face with the inscriptions ‘2015: No Vacancy In Aso Rock, Lets Do More, One Good Term Deserves Another, Support Dr. Goodluck Azikiwe Jonathan For 2015 Presidency.’

But apparently reacting to the widespread outrage and condemnation  that trailed such a move, the president, through his special adviser on media and publicity, Dr. Reuben Abati, Wednesday, denied any complicity in the campaign posters, saying those who behind it were doing it of their own accord and not acting as his agents.

Abati while reiterating the president’s earlier stance that 2015 is still far away to be discussing it now, said the president is focused on delivering on his mandate for Nigerians and would not be distracted by the politics of 2015.

According to Abati, “those pasting the posters are trying to express their own view. The president had stated that he will talk about the presidency from 2014. Those doing these do not have the consent of the president.

According to him, “what is most important now is for the president to deliver on his electioneering promise to Nigerians and not to embark on the pasting of posters”.

He said: “It has not come from the president. Nigerians should take the president for his word and ignore any other information to the contrary”.