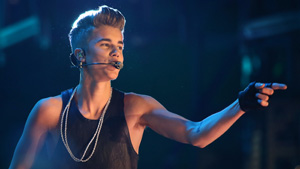 Pictures of Justin Bieber holding what appears to be a marijuana cigarette surfaced online over the weekend. The pictures didn’t actually show Bieber inhale the blunt, and no one can see if what’s rolled inside is indeed weed, but the 18-year-old took to his Twitter account with some apologetic words.

“Every day growing and learning. Trying to be better. U get knocked down, u get up,” the “Baby” singer tweeted several hours after the images surfaced. “I see all of u. I hear all of u. I never want to let any of you down. I love u.”

Bieber, who kicked off his tour on January 5 in Salt Lake City, Utah, didn’t directly address the photos in his tweets. “Like I said…2013…new challenges. new doubters…Im ready,” he wrote. “We are ready. see u all tomorrow and everyday after that.”

Bieber has been tweeting messages for his haters for a few days now, though. Before the incriminating images even surfaced he was getting philosophical. “Another year. another year to be doubted. another year to work hard and prove them wrong. another year we are coming out of the gate strong,” he rhymed.[Vibe]