RadarOnline reports that reality TV star, Kim Kardashian is offering her estranged husband Kris Humphries a whopping $10 million to settle their divorce but the NBA star is not having a cent of it.

“After Kim filed for divorce, she offered Kris a $10 million payoff, with the agreement that he would not continue to pursue an annulment to their marriage on the grounds of fraud,” the insider says.

Kim’s representative responded in a statement, “This is obviously yet another inaccurate report that lacks facts. No such deal was ever made.” 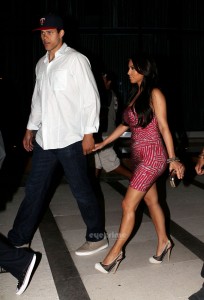 However the New Jersey Net star is opting to prove that his 72-day marriage was a fraud in the court of law.

“Kris flatly rejected the offer because it has never been about money for him,” the source says. “He wants to be able to marry in a church again, with a clear conscience, when he finds someone special. Kris is deeply religious and he believes that the only way he can do that is if his marriage to Kim is annulled.”

Their divorce trial is reportedly scheduled for the middle of June to accomodate Kris’ busy schedule which means the proceedings could happen around the time she gives birth to her first born with Kanye West in early July.

“Kris wants to move on with his life just as badly as Kim does – he is constantly getting heckled by NBA players and fans – and he just wants to be able to close this disastrous chapter in his life once and for all. If Kim would just agree to grant him the annulment, they could both move on with their lives.”[Vibe]