Nigeria’s reggae legend, Majek Fashek who is currently being managed by A-Plus Entertainment, a record company which rehabilitated him last year is hospitalised at the moment. 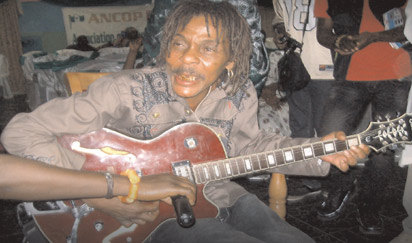 He was allegedly abducted recently by one of his friends who wanted to lure him into signing concert deals outside the shores of the country.

The CEO of the outfit, Hajia Oluremi Dangaji disclosed this ugly development to Showtime, during the week.

According to her, Majek who was due to drop his latest album this week, disappeared from his Gowon Estate apartment since last December without traces.

However, after futile efforts to trace his whereabouts, the reggae legend resurfaced few days ago, looking haggard, weak and pale.

Narrating Majek’s ordeal, Hajia who claimed that her company had spent over N35 million to get the reggae master back on his track, said “This meeting is meant to formally intimate you with my company’s project with superstar, Majek Fashek whose latest album is finally ready for the market.

Unfortunately, just as we were getting ready for the release scheduled for this month, we got a shocker during the past holidays that he had been kidnapped and taken to an unknown destination by people suspected to be enemies of progress.”

“While the nightmare lasted, Majek’s former manager called to inform us that he was hospitalised in Lagos. But later, we found out that he was whisked away by one of his friends, to Ghana, who wanted to force him to sign concert deals outside the shores of the country without the consent of his management company.”

Haija said, while in Ghana, Majek’s conscience did not allow him to do the bidding of his captors, as he decided to return to the country.

At the moment, she said, Majek has gone back to his old lifestyle. “He has become a shadow of his old self, breaking bottles and behaving very abnormal.

In fact, he has not been himself since he returned to the country. Right now, he is hospitalised. We are trying to stabilize his condition. That’s why we deemed it fit to intimate you about the ugly development,” Haija narrated.

Haija, a widely-travelled entrepreneur and philanthropist who hails from Edo State has since resolved to resuscitate Majek’s dwindling music career, as well as embarking on a musical tour of some European and American cities.