Despite all effort to reinvigorate the dwelling career of this reggae legend, Majek Fashek, it’s obvious that he needs serious attention spiritually and otherwise. 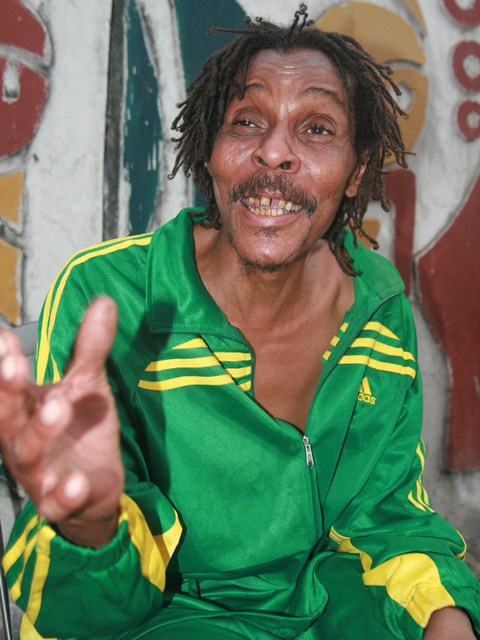 Recently, the living but half dead reggae legend was sighted staggering and murmuring some inaudible at Ogba area of Lagos. Veteran reggae artist, Majek, no doubt is now a shadow of his former self, the once handsome looking, bubbling fellow is now in a pitiable condition.

He is now mentally unstable and sources say he is already in rehab but from a recent report, the ‘Send Down the Rain’ crooner is not getting any better.

He was spotted last Friday at Ogba, Ikeja Lagos clutching his guitar, staggering with a cigarette in his mouth, murmuring incoherent words. Though, he resides at Gowon Estate of Egbeda area of Lagos, his mission at Ogba was not known.

“Fashek is gone; I’m not sure any kind of rehab will bring him back. He messes up in the estate; he drinks and staggers around with crowd gathering around him.

He’s dried up. He has body guards and a deep blue jeep, but most times, I think he sneaks out of the house and ends up misbehaving. The first time I saw him, I thought he was a mad man. He’s gone!,” said a source who reside close to him.

The main cause of Majek’s condition is none other than his addiction to marijuana, cocaine and alcohol.

Sometime in 2012, we learnt he got a music deal of N15 million naira and was scheduled to release an album, no one has seen any album or heard any single but from the look of things, all did not go well.