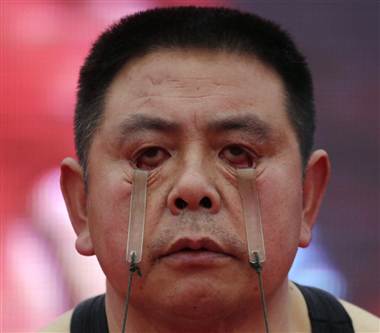 This is more shocking than it is unbelievable – carrying two buckets of water with the eyelids? But Wang Xianxiang, a 42 year old fireworks manufacturer from the central Chinese province of Hunan, can suspend two buckets of  water with a combined weight of 9 pounds (4Kg) on plastic hangers hooked to his eyelids for a minute.

And Wang says he is hoping to increase the amount of weight he can carry with his eyelids.

Wang entertained local migrant workers at a provincial festival near his hometown of Liuyang Saturday.

“When I first started it was extremely painful,” Wang told NBC News about his unique talent, “but after a lot of practice it’s just uncomfortable today.”

Wang, who is married with two children, said he has been doing his eyelid trick for five to six years and started doing it purely out of boredom but as he increased the weight on his eyelids, he started to train – practicing for 30 minutes each morning and two hours at night.

However, Wang did not enjoy the support of his family who initially frowned upon his hobby, but over time, they rallied round him as his status grew within the community.

When asked what his aspirations for the future were, Wang kept it simple. “I can currently hold 4.5 pounds on each eyelid, I’d like to push that to 11 pounds per eyelid.”

He was optimistic that he could accomplish that eye-catching feat by the end of the year. 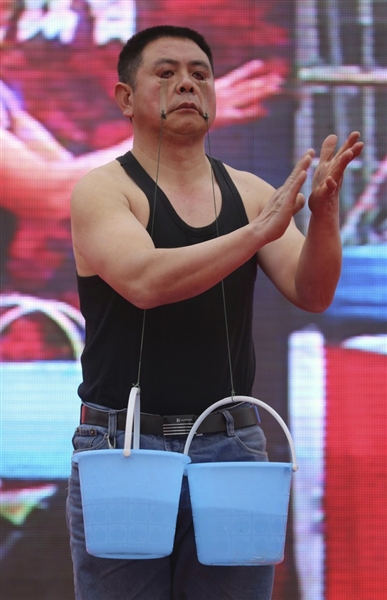