It is now being speculated within the music industry in hush tones that D’Banj may been shown the exit door at Kanye West’s G.O.O.D Music label which D’Banj claims he is still at. 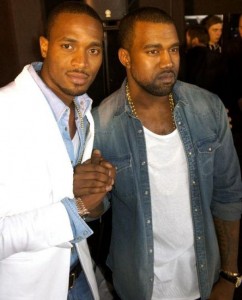 According to information gathered from reports and some industry sources, all may not be too well between D’Banj and his American boss.

What Nigeriafilms.com scooped reveals that Kanye was never happy with the split between D’Banj and Don Jazzy in early 2012.

We gathered that Kanye actually signed Don Jazzy to produce D’Banj for his record label, but with the split between them, it was no longer possible for Don Jazzy to perform his obligation of making ‘good’ beats for D’Banj.

Now that D’Banj took a step further to sign J-Sleek as his music producer, what sources in D’Banj’s camp reveal to industry sources is that Kanye is not pleased with J-Sleek’s production prowess and he sees D’Banj’s new collection of songs as weak.

What some tale-bearers are saying now is that Kanye is disappointed at D’Banj as his (Kanye)initial quest of storming African music through the duo of former Mohits Records has been defeated and D’Banj’s new singles are no where match what convinced him to sign on the two African superstars when he signed them in 2011.

There are indications that D’Banj may consider reconciling with Don Jazzy or lose his deal with Kanye.