Home Metro News My Brother Was Not Assassinated, He Was Killed By Govt – Late...
Facebook
Twitter
WhatsApp 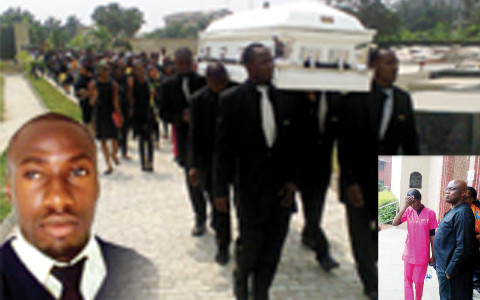 Government at all levels have been blamed for the death of 27-year-old medical doctor, Irawo Adamolekun, who was shot dead in traffic at the Anthony Village end of Ikorodu Road, Lagos, last Friday.

The late Irawo’s only surviving sister Ojia, also a medical doctor, debunked the Lagos state police command’s theory that her brother was assassinated saying the man who pulled the trigger and killed her younger brother must have been one of the many frustrated Nigerian youths.

Ojia bared her mind outside Our Saviour’s Church, Tafawa Balewa Square, Lagos on Thursday where a funeral service was held for the deceased.

“Every citizen should be entitled to a kind of job whether he or she is educated or an illiterate and if not, the poor will continue to attack the middle class which my brother fell into.

“I appeal to everyone to love one another and help the less privileged in our midst and put an end to all these (robbery attacks) because it might be your brother tomorrow.”

She added that her brother might have survived the attack if the emergency response system in the state was quick and effective.

She said, “I know the Lagos State Government have some emergency points on some major roads and I hope they are not just there for decoration. I believe that if emergency services were immediately available he might have survived it.

“Meanwhile, some policemen fled the scene of the incident when my brother was shot. I wonder why the police want to interview me now and take my statements. Is that not medicine after death? I really have some questions to ask them (police)” she disclosed.

Informationng.com reports that Ojia and the late Irawo founded a medical consultancy firm, Quick Medical Consults which offers free emergency and non-emergency medical services for the poor, in honour of Imole (Ojia’s immediate brother) who died as a medical student of Igbinedion University, Okada in 2004.

Irawo’s funeral service was attended by professional colleagues, friends, and associates including popular Nigerian rapper, MI Abaga. Thereafter, his remains were committed to mother earth at the Vaults and Gardens, Ikoyi.

Ojia alongside some close associates performed the dust-to-dust rites amid sobs at about 1:53 pm