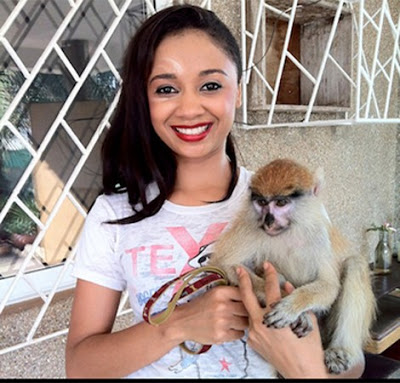 Monkey Kiko can be described as a ‘celebrity monkey’ after it appeared in a CNN interview for the role it played in the ‘Uncle Obama’ hit-track and also followed Deborah to some of her public music performances.

“I’m not saying Chris Brown looks like a monkey but rather, my monkey looks like Chris Brown…The funny thing is, Chris Brown also owns a monkey and we both posted pictures of our monkeys on twitter”, Deborah told NEWS-ONE in an exclusive interview.

The ‘Uncle Obama’ hit maker also added that not only did the 11-month-year-old monkey in a way looked like Chris Brown but it had blonde hair and could dance like him too.

Deborah also revealed to NEWS-ONE that she was planning on getting a ‘girlfriend’ monkey for Kiko since it sometimes gets lonely.

The former late night celebrity show host who replaced Dzifa briefly on Etv said she fed her famous monkey with grapes, pears, apple and bananas from the Koala shopping centre.

“My monkey eats a lot of fruits, boiled yam, rice and stew but I don’t give Kiki meat because it is not healthy for him.”

The monkey, whose scientific name is ‘patas monkey’, is a ground-dwelling monkey found around semi-arid areas of West Africa, and into East Africa was said to have been bought in the Northern part of Ghana.

DO YOU SEE THE RESEMBLANCE?