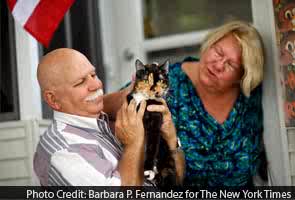 A cat travelled 200 miles to get back to his home town, claim his owners.

Holly, a house cat who rarely ventured outside prior to her journey, had jumped out of her owners’ mobile home while on a trip to Daytona Beach.

Jacob and Bonnie Richter were stunned when Holly turned up in the back garden of Barb Mazzola and her children two months later, The Daily Telegraph reports. Mazzola lives just one mile away from the Richters.

Holly was returned to her owners when Mazzola took the cat to a vet and discovered an identification microchip.

Marc Bekoff, a University of Colorado professor who specialises in animal behaviour, said that Holly’s survival was a “complete mystery”, adding: “She may have had some basic sense of direction and then got clues from sights or sounds as she got closer, but the truth is that we have no idea how she got home.”

Jacob Richter, 70, said: “Evidently, she had some sort of inner sense or magic that kept her on track. I have no idea how many of her nine lives she must have used up because there are a lot of crossroads and lot of traffic, not to mention all the other threats from nature and other animals.”

63-year-old Bonnie Richter said that she hopes some good will come out of Holly’s story, saying: “If there is one message I hope comes out of this, it is that other owners get their animals back after having them microchipped because they heard about Holly.”