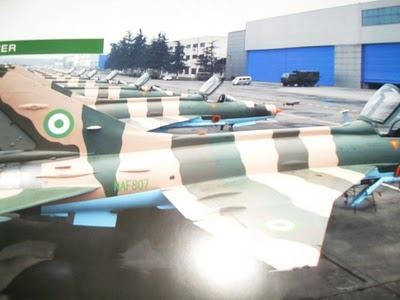 As a follow up to the directive by President Goodluck Jonathan to the Armed Forces to commence the deployment of 900 troops to participate in the military operation to liberate Mali from Islamist rebels, the Nigerian Air Force, yesterday, commenced moves to deploy two of its fighter jets and a transport aircraft to facilitate the combat operations.

The deployed fighter jets are the F7 supersonic jet, the latest and most modern in the NAF inventory, and the Alpha jet aircraft aka ‘Dudu Bird’ which fast tracked the surrender of rebels in both the Liberian and Sierra Leonean civil wars

The officers and men who were addressed by the Chief of Air Staff, Air Marshal Alex Badeh,  admonished them to be good ambassadors of Nigeria.  At press time, the fighter jets, Alpha Jet and F7 Supersonic, were on their way to join French fighter jets already in Mali.