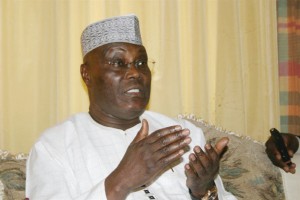 As reactions continue to trail the mild judgement of an Abuja High Court in the case of John Yakubu Yesufu, a former Director of Police Pension Office, former vice president, Atiku Abubakar, has also reacted, saying, via his Facebook page, that the country’s Legislature needs to come up with tougher sanctions for graft and corrupt practices, adding that only such would successfully tackle the high rate of corruption in the country.

According to the statement, “There is a need for the Federal Government and National Assembly to make the anti-corruption law stiffer to serve the purpose of deterrence against white-collar criminals in the country… The outrage that greeted the two-year sentence passed on a pension crime convict has brought to light the major defects of the anti-corruption law.

“Former President Olusegun Obasanjo submitted a stiffer draft law which, however, was watered down by the then National Assembly… Rather than trading blames, Nigerians should also look at the weaknesses in these laws and call for urgent review of the laws. The purpose of punishment is deterrence and the ultimate desire to produce remorse in the hearts and minds of offenders.

“This, however, could not be achieved when the punishment is made so light as to make criminality attractive… A situation where the majority believes the law is designed against the poor or petty offenders is not too good for the credibility of the anti-corruption war… The recent outrage over the light conviction of the pension offender could send the wrong signal to the international community about the seriousness or sincerity of Nigeria to fight corruption.

“The existing penal provisions of the anti-corruption law make it impossible to impose punishments that fit the gravity of the offences committed by white-collar criminals… Having played an active role in the formulation of the anti-corruption laws and creation of the EFCC, I believe that more than a decade after, it was about time the provisions of the law is reviewed to strengthen the commission and the anti-graft war.”