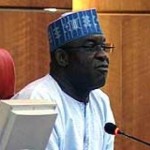 Senate President, David Mark, has revealed that the National Assembly is willing and ready to enact a law to address religious extremism in Nigeria. Mark made this known at a reception organised in honour of John Cardinal Onaiyekan on his 30th Episcopal ordination and elevation to the College of Cardinals in Abuja on Sunday.

According to him, the National Assembly was willing to make the religious environment much friendlier by enacting laws that would fight all forms of religious intolerance and extremism in the society. He said that the legislature was holistically looking at the issue of immorality in the society without preference to any particular one.

The Senate President further said that the Senate had already passed the bill on gay marriage and was awaiting the report of the House of Representatives before it would be sent to the executive.