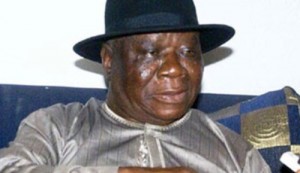 An Ijaw leader, Chief Edwin Clark, on Thursday, chided the Nigerian Governors Forum (NGF), saying that it has become a stooge to the former president, Chief Olusegun Obasanjo, “who is always visiting any of the governors that speaks ill of President Goodluck Jonathan.”

Chief Clark made this known while addressing a press conference in Abuja. He added that the governors had hijacked the local government structure in their various states and also taken over the funds meant for its running. Clark said the governors’ forum was trying to enforce its authority over the president, adding that it was not happy with the national chairman of the party, Alhaji Bamanga Tukur, “because he is not from their ranks.”

He also noted that they are undemocratic and worse than the military in the way and manner they were running the affairs of the forum and opposing the government of President Jonathan, saying that the plan of the forum was to upturn the leadership of Tukur and install someone from their rank as the national chairman of the party. According to him, “the Governors’ Forum is now acting as an opposition party to the Federal Government. It deliberately breaches with impunity the Constitution of the Federal Republic of Nigeria and that of the PDP without any challenges.

“The forum has now become a threat to the peace and stability of Nigeria. Most of the governors today are more dictatorial than the then military governors… I have seen and made enquiries about counterparts in the United States of America (USA). A governors’ association called the National Governors Association (NGA) does exist, but their existence and operations are practised and operated within the confines of the law of the land.