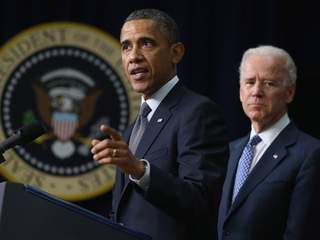 The U.S. capital began two days of ceremony and celebration on Sunday for the second term of Barack Obama’s presidency, starting with the swearing-in of U.S. Vice President Joe Biden.

Biden, 70, took his oath of office at his official residence, the Naval Observatory in Washington. The swearing-in was presided over by U.S. Supreme Court judge Sonia Sotomayor of the Supreme Court.

Because the date for inauguration set in the Constitution, Jan. 20, falls on a Sunday this year, Obama and Biden were to be sworn in for second terms in separate, private ceremonies on Sunday.

Obama will be sworn in at the White House at 11:55 a.m ET (5:55 p.m Nigerian time) by U.S. Chief Justice John Roberts. The presidential term in office officially begins at noon on Jan. 20, in strict compliance with a date and time specified by the U.S. constitution.

The more traditional and well known ceremonies are set for Monday, when Obama, 51, will repeat the oath of office at noon, then deliver an inaugural address before a large crowd on the steps of the U.S. Capitol to a national television audience in the millions.