Mr Barack Obama was officially inaugurated in a small White House ceremony on Sunday, as the US Constitution requires the president be sworn in by 20 January.In the famous Blue Room, he rested his hand on a Bible used for many years by his wife’s family and vowed “to preserve, protect and defend the Constitution of the United States”.

Obama, smiling throughout, delivered the oath which was administered by U.S. Chief Justice John Roberts, in the presence of his wife, First Lady Michelle and their two daughters, Sasha and Malia, looking on. Afterwards, Obama kissed his wife and daughters, telling them: “I did it.” 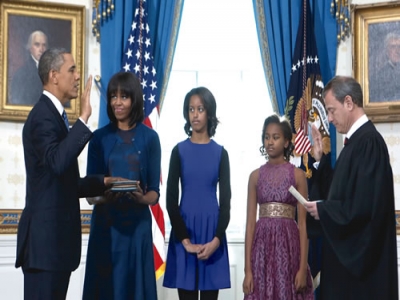