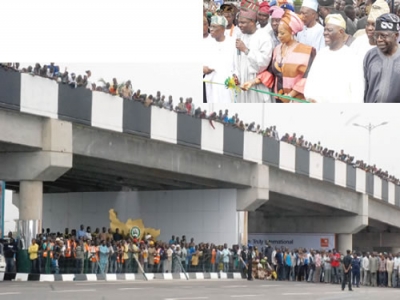 It was a moment of celebration on Thursday in Ogun State when the first pedestrian bridge and flyover worth N260 million and N1.3 billion respectively was commissioned by the governor.

The commissioning of the projects which are part of the fulfilment of the electioneering promises of the Senator Ibikunle Amosun led-government in the state, was witnessed by former head of Interim National Government, Chief Ernest Shonekan, former Chief of General Staff, General Oladipo Diya (retd), the national chairman of the Action Congress of Nigeria (ACN), Chief Bisi Akande, former governors of Lagos and Ekiti states, Chief Bola Tinubu, Chief Niyi Adebayo, Senator Biyi Durojaiye and Senator Gbenga Obadara, among others.

Shonekan, in his goodwill message commended the Amosun government for contributing to the future economic growth of the state.

He lamented the poor maintenance culture to public property and attributed it to the poor condition of infrastructure across the country.

“Today’s event shows that the state government is committed to the socio-economic development. We should continue to invest in social infastructure,” he said.

Senator Tinubu couldn’t hide his joy as he applauded Amosun for making their party proud by transforming the face of the state, saying that redressing infastructure deficit of any nation needed long term financial assistance.

Amosun said that the project were not an accident but part of his administration’s programmes on Rural and Infrastructure Development and Urban Renewal reflected on everything that represents quality, vision and the tradition of excellence.

He said, “today’s commissioning, on one hand, is a fulfilment of the promise we made during the elections. On the other hand, we are scoring another first in the provision of infrastructure as this bridge is the first to be constructed by the Ogun State government”.