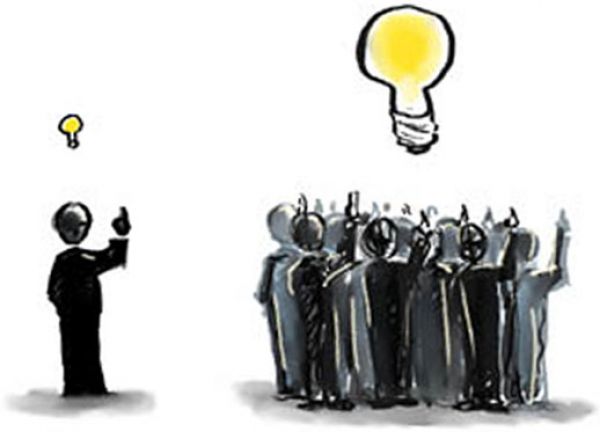 Nigeria is a great country with great hustling people. With every hustle come challenges that must be surmounted.

Ask God for help. Now, it doesn’t matter if you are religious or if you have one of those new religions not recognised by our law. Ask the general god – the Nigerian god – to whom all solutions are outsourced. Ask for his help in choosing and changing leaders; in wanting PHCN to provide electricity for that match because your generator is bad; in wanting fuel tanker drivers not to go on strike; in wanting roads; in wanting bombs to stop; in wanting corruption to stop; and in wanting to keep our country one. This is the first necessary, sometimes most important, step.

Create a committee. Ministries, Departments and Agencies of government are of no use in solving problems. Once a specific problem has been identified – for example, the presence of too many people selling boiled maize and groundnuts on the streets — create a specific committee to tackle this issue. In the case of this example, the committee would have two sub committees, one for boiled maize, and the other for boiled groundnuts. Then when that committee is done, create a committee to implement the report of the first committee.

Create multiple solutions. So, if as a government official you have a problem with your public image, in spite of having a department of Media and Publicity, create a new department to handle the problem. Call it Public Image Affairs department or something like that. The more agencies attack a problem, the better. Never try to fix the inefficiency of an agency of public institution. Always create a new body. So, if the crime division of the Nigerian Police Force is inefficient, understaffed, underfunded, unskilled, and corrupt, do not fund, train or discipline them. Create a fresh body, like the ICPC or EFCC. There is nothing like fresh ideas in trying to solve a problem.

When you have a big problem like terrorism, especially when even the President himself confirms that some of the terrorists are in the Police, you must look for solutions outside our diligent Police Force. Think of something smart. Like one brand new Police Force for each financially dependent state. No, we will not scrap the Federal one. They will exist side by side. Think of how many people’s hustles will be blessed when you embark on this project. New uniforms, new jobs, new cars with sirens, new guns. A new militia for every governor blessed with constitutional immunity. I mean, governors won’t need to have side armies and gangs funded in the dark anymore. Think of it this way; when indigenes fill up the new State Police, terrorism, bombing, corruption, and kidnapping will vanish. Don’t ask what will happen when indigenes and non-indigenes fight and the State Police is called to keep the peace. God will not let that happen. Never mind that there are wicked people who will come up with arguments like states already having problems paying civil servants, and governors already having state legislators in their pockets. In fact, I overheard some evil guy suggest that some governors might fill up their state police with people from their tribe or religion, thereby creating complications and mistrust in cases of communal, religious or ethnic clashes. God will judge that guy. He doesn’t understand that to solve the problem of an inefficient Police Force, you need 36 others. He doesn’t understand the power of numbers.

When a problem won’t go away or is too big, divert it or postpone it. This reduces the pressure of the problem. So, for example, if you have a problem of poverty, which results in slums and shanty towns, instead of wasting time and energy on things like resettlement, development, low-cost housing or creating jobs, do something effective, like demolition. Clear out the slums and let the poor people who want to give our country a bad name find somewhere else to call a slum. Demolition is also very effective if your predecessors in government have turned a blind eye and allowed people to build in unapproved areas. Demolition covers a multitude of sins.

When there are problems and you are in government, you must never allow anything to stop you from travelling out of the country. Travelling is very important because it gives you time to breathe, shop, and learn from other countries. But if you really want to solve problems effectively in Nigeria, you have to outsource them. There are things that the Nigerian god prefers not to handle. Not that he cannot handle them, but you see, he is clean and doesn’t like to dance in murky waters. For example, if you need to convict or arrest powerful people who have brazenly committed crimes, outsource it to a nice foreign country. I mean, the British used us as a colony to get resources, why can’t we use them to get justice? Tit for tat. Anyone who doesn’t like it should go choke on cassava bread. All good people know that justice for Nigerians is Nigerian justice, whether made in London or Johannesburg.

God bless your hustle and make it problem-free.