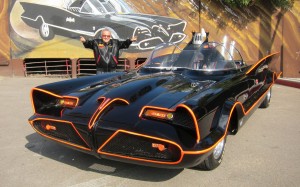 Car collector Rick Champagne scored the ultimate ride: the original Batmobile. Great deal for a car enthusiast, it only cost him $4.6 million!

The vintage ride was used in the Batman television series, that ran on ABC between 1966-68. The car is the first of six models, and was built in 1966 by legendary Hollywood car customizer George Barris. Barris built the car with a $15,000 budget in only 15 days, adding to a 1955 Ford Futura concept model that he purchased for $1. Now, that’s a return on an investment!

Barris had owned the vehicle until Champagne purchased it at the Barrett-Jackson auction house in Scottsdale, Ariz. this week.

The Batmobile is tied with the Aston Martin DB5 that Sean Connery drove in Goldfinger for the highest price paid for a movie car at an auction. [Vibe]