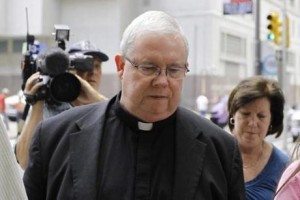 In a case that has already put a former official of the Catholic Archdiocese of Philadelphia in prison for covering up child s*xual abuse, a city jury Wednesday returned guilty verdicts against a priest and former parochial schoolteacher for the s*xual assault of a 10-year-old Northeast altar boy.

Prosecutors hailed the verdict as a victory for victims of child s*xual abuse.

The Common Pleas Court jury deliberated about 20 hours since getting the case Friday afternoon before returning the verdicts today in the trial of the Rev. Charles Engelhardt and Bernard Shero.

Engelhardt, 66, a priest for more than four decades, was found guilty of four of the five charges against him: child endangerment, corruption of a minor, indecent assault and criminal conspiracy.

The jury, however, said it was deadlocked on a count of involuntary deviate s*xual intercourse.

Shero, 49, a former elementary English teacher in the parochial schools, was found guilty of all five charges against him: rape of a child, involuntary deviate s*xual intercourse, child endangerment, corruption of a minor and indecent assault.

Both men reacted stoically to the verdicts, which were announced at 3:30 p.m. before a courtroom packed with relatives of both men and the mother and father of the victim.

Defense attorneys Michael McGovern, for Engelhardt, and Burton A. Rose, for Shero, seemed stunned by the verdicts – and when Judge Ellen Ceisler ordered both men immediately taken into custody.

McGovern embraced Engelhardt and clapped him on the back before the priest was led from the courtroom by sheriff’s deputies.

Afterward, McGovern said that “I’ve been present for trial jury verdicts for 37 years now and this is the most disappointing, shocking verdict I’ve ever experienced.”

“I still believe that Father Engelhardt is innocent of all charges 100 percent,” McGovern said.

Rose told reporters that he also was convinced of Shero’s innocence, calling Shero a “soft-spoken man with a lot of integrity.”

Ceisler set sentencing for April 18. Assistant District Attorney Mark Cipolletti, who prosecuted the case with Evangelia Manos, said Shero faces up to 57 years on prison and Engelhardt up to 37 years.

Both defense lawyers said they will appeal.

In a news conference after the verdict, District Attorney Seth Williams praised the verdict and noted that one out of four women and one out six men under the age of 18 have been sexually abused.

“The message for me is that we have to listen to children,” Williams added.

Engelhardt and Shero were charged in February 2011 with serial rape of the boy while he was in the fifth and sixth grades in the St. Jerome’s parish school. [Philly]