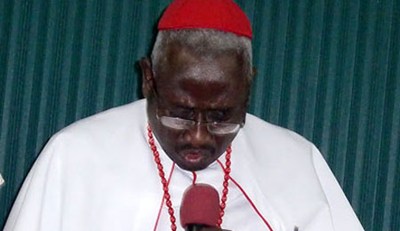 The Governor of Central Bank of Nigeria, CBN, Malam Sanusi Lamido Sanusi, has again received knocks over his recent call on the FG to proscribe ethno-religious groups in the country, from the Prelate, Methodist Church Nigeria, His Eminence, Dr Ola Makinde.

The Prelate who was speaking during the inauguration of the Methodist Diocese of Kubwa and the enthronement of the Rt. Rev. Rufus Babalola as Bishop in Abuja, on Sunday, also appealed to politicians to avoid making inflammatory statements.

His words, “my appeal to politicians in this country is to guide their utterances that can turn Nigeria into chaos.

“Mr President advisers must be sincere, the statement credited to governor of CBN, that he wanted federal government to proscribe CAN and others, honestly is unfortunate, the man is becoming political governor of CBN.

“What he is saying is that Christianity should be proscribed, he should not be in the cabinet of Mr President, he is becoming more political than governor of CBN.

“Those who are holding sensitive position should not make such statement because is inciting, that is why the man gave money to people in Kano, when there was bomb blast, and nothing was given to people in Madalla until we cried out.

“It is an unfortunate statement, and I am warning him to stop insulting all Nigerian Christians, if he does not want the wrath of God. He is not a politician but a sharia expert”, the Methodist Prelate stated.