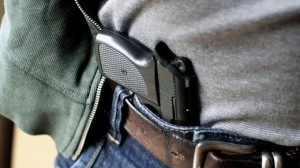 You can’t say you’ve been in a more horrible position than this guy who will appear in court for carrying a gun that shot his manhood.

A security guard at a hospital in Rio Claro, Trinidad and Tobago, accidentally shot his penis off with his .38-calibre handgun.

A resident called police to report the sound of a gunshot coming from a parked car.

When they arrived on the scene, police discovered the man bleeding from his groin with spent ammunition cartridges at his side.

Adding insult to his injury is the fact that, according to police, the man didn’t have a license to carry the gun.

As a result, he will be charged with illegal possession of a firearm and ammunition… once he gets out of hospital, where he is under armed guard. [MSN]