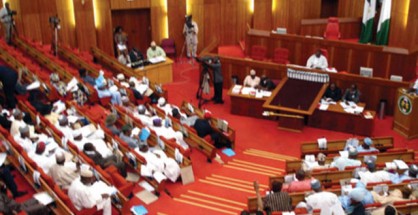 It is no longer news that employment into major Federal Government establishments is sold to the highest bidder, but what is however news is that this unhealthy practice has just gotten the attention of the Senate which has ordered a public hearing on the malaise.

Resuming plenary yesterday, the upper chamber of the National Assembly heard how Nigerians were fleeced of amounts ranging between N400,000 and N500,000 to secure jobs in Federal Ministries, Departments and Agencies, (MDAs). The senators alleged during Wednesday’s plenary that the syndicate, based in Gwagwalada, Karu and other places in the Federal Capital Territory (FCT), is working for the heads of MDAs.

Speaking on a Motion on Employment irregularities in the MDAs sponsored by Senator Abubakar Atiku Bagudu, the senator who represents Kebbi Central, referred to a statement credited to the recently retired Comptroller-General of the Nigerian Immigration Service (NIS), Mrs Rose Chinyere Uzoma, that: “4,000 employment slots approved by the Federal Government were being sold to job applicants and some allocated to other personalities. Due process involving advertisement for interested members of the public to apply, have not been observed,” Bagudu disclosed.

“Employment letters were allegedly offered for sale between N400,000 and N500, 000 by the syndicate whose operation bases are in Gwagwalada, Karu and other places in the Federal Capital Territory (FCT) and that recruitment exercise favours some states of the federation which is a total negation of the federal character principles.”

Speaking in support of Bagudu’s claim, Senator Mohammed Ali Ndume (representing Borno South) narrated his experience with a constituent thus: “A constituent came to me that he needed N200, 000 to secure employment in one parastatal. When I refused to give him the money, he said that was the only requirement needed and if I didn’t give him the money, the job was as good as gone.

“After much pleading, I caved in and gave him the N200,000 only for him to come back to me days later that the price was no longer N200,000 but N400,000. This person was a graduate of Geography who had stayed at home for four years without a job.”

In his remarks, Senate President David Mark blamed the situation on desperation. “There’s real unemployment in the land and there is desperation also.”

“But there is desperation everywhere and this is a serious thing in the land. We should do anything to minimize it by creating employment.”

The senate president therefore recommended that those who had experiences or stories to share, should meet with relevant committees during public hearings and perhaps, “point out those that demanded money for employment from them.” He also charged the Committee on Federal Character and Inter-Governmental Affairs and Employment, Labour and Productivity to do a thorough job in order to minimize the malaise, if not totally eliminate the level of injustice going on in the country.

Meanwhile, on Tuesday, the Senator Dahiru Awaisu Kuta-led Federal Character Committee had summoned heads of some MDAs on the matter. The two committees were expected to conduct a public hearing on the matter and report back to the senate in eight weeks.