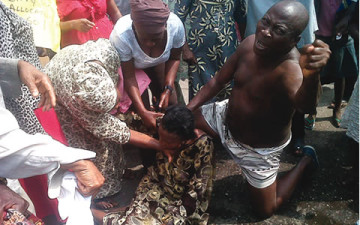 In a rather shameful development, a member of the Nigerian Union of Pensioners who retired from the Nigerian Postal Service (NIPOST), Silifatu Adetola, slumped on Monday as members of the union picketed the Lafiaji Post Office, Obalende, Lagos.

As she was being revived by the remaining aggrieved pensioners, all Adetola could manage to say was that she had not eaten anything that day. She went down as the protesters chanted at the front of the post office. But her colleagues quickly poured water on her. She was quickly rushed to a hospital afterwards.

The pensioners were protesting their unpaid 69 months pension arrears. Chairman of the Lagos chapter of the union, Elijah Akindutire, said the incident was an attestation to the sufferings they were subjected to as a result of the unpaid pension

Akindutire said, “The government owes us 69 months of pension arrears. Most of us came here on empty stomach. That woman could have died because the government did not see us as important enough to pay what they owe us after serving meritoriously for years… We will not leave the place until we get an alert that our pension arrears have been paid. Some of us retired as far back as 2005. Some were paid while some were not. Even those who were paid got a fraction of what they were owed.”