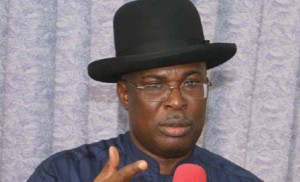 Governor Seriake Dickson of oil rich Bayelsa State, shocked the world on Monday when he said he inherited N4,451 from his predecessor, Timipre Sylva, in February 2012, and then went ahead to give a detailed account of how his administration grew the paltry sum to over N16 billion.

Dickson made these proclamations while presenting his administration’s financial scorecard for December 2012, in Abuja. He said his state’s Internally Generated Revenue (IGR) would hit the N2 billion monthly mark by the end of the year, up from about N300 million when he assumed office. Represented by his Commissioner for Finance, Duate Iyabi, Dickson said 2013 has been dedicated to consolidating the achievements of the preceding year.

Meanwhile, speaking before proceeding on a two-week break, the governor had said the N50 billion Bond his embattled predecessor secured was also posing a challenge to his administration, lamenting that the figure would hit N104 billion in 2017.

However, countering Dickson’s claim, the former governor, Sylva, said Dickson was not in a position to know how much he left in the state’s coffers because Dickson did not take over from him. Sylva’s Spokesman, Dofie Ola said Dickson could not have inherited anything from the former governor because Sylva did not hand over to him. He said after the Supreme Court judgment, Sylva handed over to the former Speaker of the State House of Assembly, Mr. Nestor Binabo. “We did not hand over to Dickson, there was an acting governor who took over from us and so the question should go to him (Binabo),” Ola said yesterday.